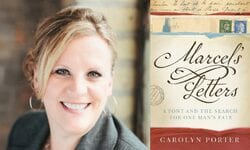 Carolyn Porter
Marcel’s Letters: A Font and the Search for One Man’s Fate

Seeking inspiration for a new font, graphic designer Carolyn Porter stumbled across a bundle of letters in a Stillwater antique store and was immediately drawn to their beautiful handwriting. Though she couldn’t understand the language, she could see that they had all been signed by a man named Marcel Heuzé and mailed from Berlin to France during World War II. Marcel’s Letters is the incredible story of her search to uncover the mystery of Heuzé’s fate while simultaneously developing the acclaimed P22 Marcel Script font, immortalizing the man and his letters that waited years to be reunited with his family.