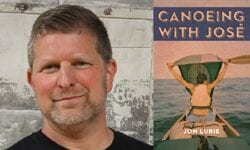 The first time journalist Jon Lurie met José Perez, the smart, angry, 15-year-old Lakota-Puerto Rican drew a knife and questioned Lurie’s authority. Five years later, both men are floundering. Lurie is newly divorced and depressed. Perez is embedded in a haze of women and street feuds. Then Lurie hits upon a plan to save them: embark together on a mythic 2,000-mile paddle from Breckenridge, MN, to the Hudson Bay. Written in gritty, honest prose, Canoeing with José describes their remarkable journey. Lurie has worked as a journalist, wilderness guide, and as a teen adviser at a Native American journalism program. He is also the coauthor, with Clyde Bellecourt, of The Thunder Before the Storm.