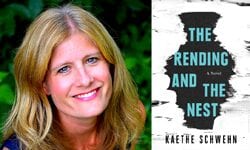 Kaethe Schwehn
The Rending and the Nest

In Kaethe Schwehn’s mesmerizing postapocalyptic debut, 95 percent of the world’s population has disappeared without a trace. The 5 percent who remain must struggle to survive in the ruined world with no understanding of what has happened or why. Through the eyes of her young narrator, Schwehn creates a vision of the future which Kirkus Reviews called “intensely familiar, yet strange”—a place in which inhabitants must reimagine their existence again and again and remake the world from what they have left. Schwehn is also the author of Tailings: A Memoir which won a Minnesota Book Award in 2015.