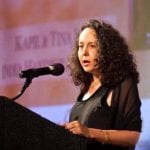 SAINT PAUL, MINNESOTA, February 9, 2018 – The Friends of the Saint Paul Public Library announced today that Kathryn Haddad, writer, teacher, community organizer, and founder of Mizna – one of the few Arab American arts and literary organizations in the United States, is the winner of the 2018 Kay Sexton Award. Sponsored by St. Catherine University, the award is presented annually to an individual or organization in recognition of long-standing dedication and outstanding work in fostering books, reading, and literary activity in Minnesota and is part of the 30th Annual Minnesota Book Awards, presented this year by sponsor Education Minnesota.

Haddad was nominated for this award in large part for her role in creating a space in the Minnesota creative community for the previously underrepresented Arab, Arab American, and Muslim communities. Her work explores contemporary experiences and reflects on the political reality of life for Arab and Muslim Americans. In 1998, she founded Mizna, an organization devoted to promoting Arab American culture, where she served as its artistic and executive director for 12 years. She also started the literary journal Mizna: Prose, Poetry, and Art Exploring Arab America, which was and continues to be the only journal of Arab American literature in the United States.

Haddad was a founding member and executive director of Pangea World Theater, and a 2004–05 recipient of an Archibald Bush Leadership Fellowship for her work with the Arab American community. As a writer, she received three Playwright’s Center Many Voices Fellowships, as well as a Travel and Study Grant from the Jerome Foundation, several grants from the Minnesota State Arts Board, and Intermedia Arts, Minneapolis. She is also a playwright whose work has appeared in many venues throughout the United States. Her play, Zafira, the Olive Oil Warrior appears in the 2017 anthology, Contemporary Plays by Women of Color, edited by Roberta Uno.

Currently, Haddad is a board member of The Loft Literary Center, a long-time member of RAWI, the national organization of Arab American Writers, and the cofounder, artistic and executive director of New Arab American Theater Works, based in Minneapolis. She has been a high school English teacher since 1991, currently teaching at John F. Kennedy High School in Bloomington, Minnesota.

According to American Book Award-winner Susan Muaddi Darraj, “Haddad is a leader and visionary who emphasizes the importance of cultural sharing and understanding to bridge differences. For many Americans, Mizna is a door opened to the lives, thoughts, and experiences of Arab Americans.”

Acclaimed writer and educator David Mura says Haddad’s tireless work has “benefited not just the Arab American community, or just the Minnesota literary community, but our community and nation as a whole.”

The selection panel agreed that Haddad has “changed the literary landscape of Minnesota.”

Kathryn Haddad will be honored on Saturday, April 21, at the 30th annual Minnesota Book Awards Ceremony at InterContinental Hotel Saint Paul Riverfront. Awards will be presented in nine book categories, as well as the annual Book Artist Award and Hognander Minnesota History Award. Tickets are on sale now and are available by visiting www.thefriends.org/ceremony or calling 651-222-3242.

Celebrating its 30th season, the Minnesota Book Awards is a year-long program of The Friends of the Saint Paul Public Library that fosters our statewide literary arts community. The process begins in the fall with book submissions and continues through winter with two rounds of judging. Winners are announced at the spring Minnesota Book Awards Ceremony. Woven throughout the season are various events that promote the authors and connect the world of Minnesota books – writers, artists, illustrators, publishers, editors, and more – to readers throughout the state. In recognition of this and its other statewide programs and services, the Library of Congress has recognized The Friends of the Saint Paul Public Library as the state’s designated Center for the Book. For more information visit www.thefriends.org/mnba.